Ten places to visit in The Loir 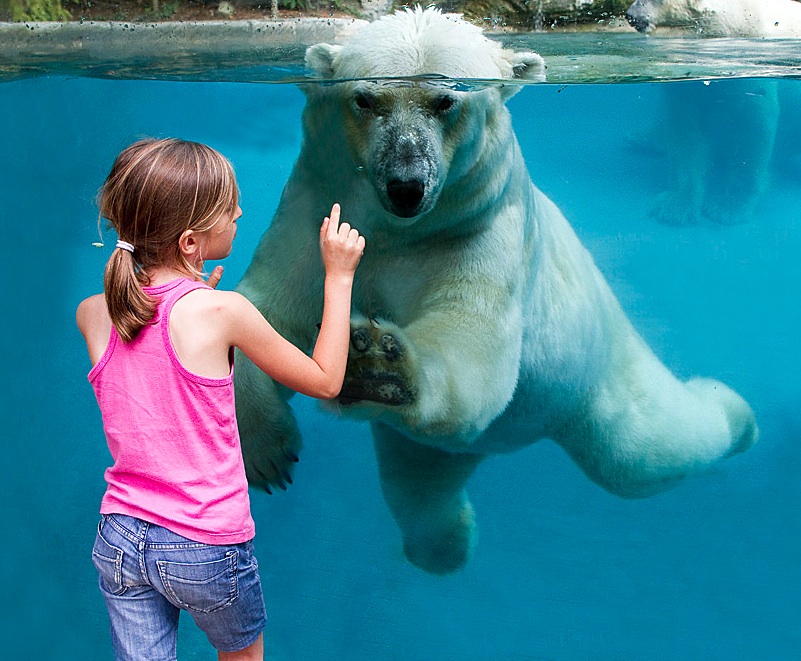 The little Loir without the “e”, is situated between Le Mans, Tours, Laval and Angers. It’s about sleepy, rolling French countryside with charming villages and enchanting towns that seem to belong to a past, less complicated era. It’s also the most northerly outpost of the acclaimed Loire AOC wines.  Here’s ten of the best places to visit when visiting The Loir.

The Artic Year in La Flèche Zoo – La Flèche Zoo – 18 hectares and 1,500 animals – is one of the most beautiful parks in France. For a unique perspective on the animals, stay overnight in one of the high-end lodges to watch the daily lives of the wolves, tigers, polar bears, etc.The suites are breathtaking and include a lush private garden and outdoor shower with chef delivering a sensational dinner and hearty breakfast.

There are two new lodges in the Arctic area which is one of the most popular with a. new polar bear is arriving this year as well. Why not become a keeper for a day?  A few hours working alongside a real zookeeper gives an insight into the job and is fun at the same time. 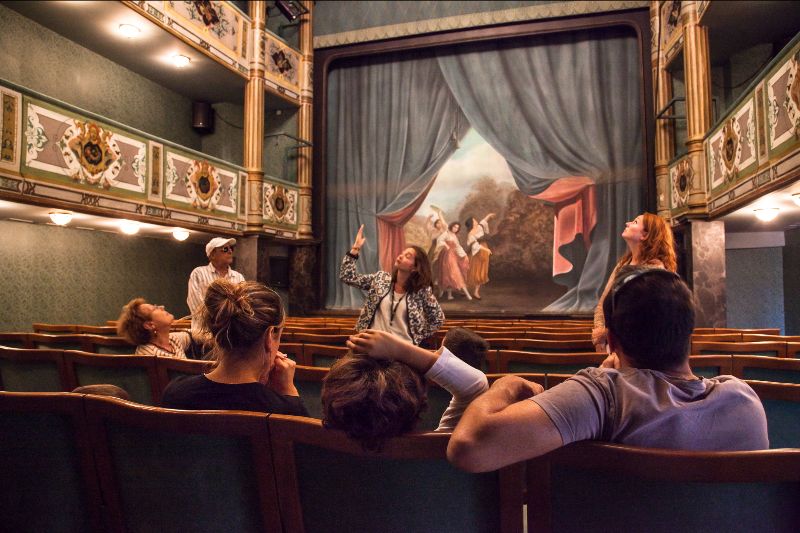 The beautifully decorated nineteenth century Italian-style theatre is positively beautiful and recently renovated. Built to the plans of architect Pierre-Felix Delarue, the interior decoration was made by Adrien-Louis Lusson, a local architect and designer. This rare French Italian theatre has a capacity of just 135 and is known for the intimacy of the performances and its impeccable acoustics. 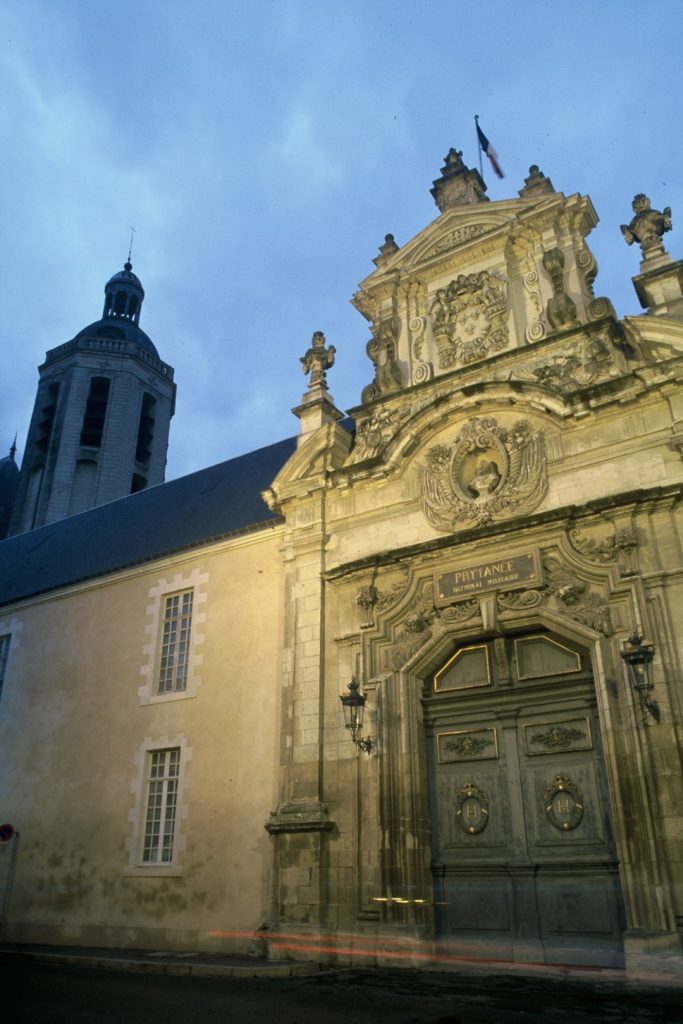 The Military School is an old royal college founded by Henri IV in 1603. It became the academy in 1808 and prepares students for the entrance exams for the military Grandes Ecoles. Visits are available at the end of July and include the gardens and museum, the zoo collections and church of Saint Louis.

Find the Harry Potter atmosphere again, in the Baugé Apothecary 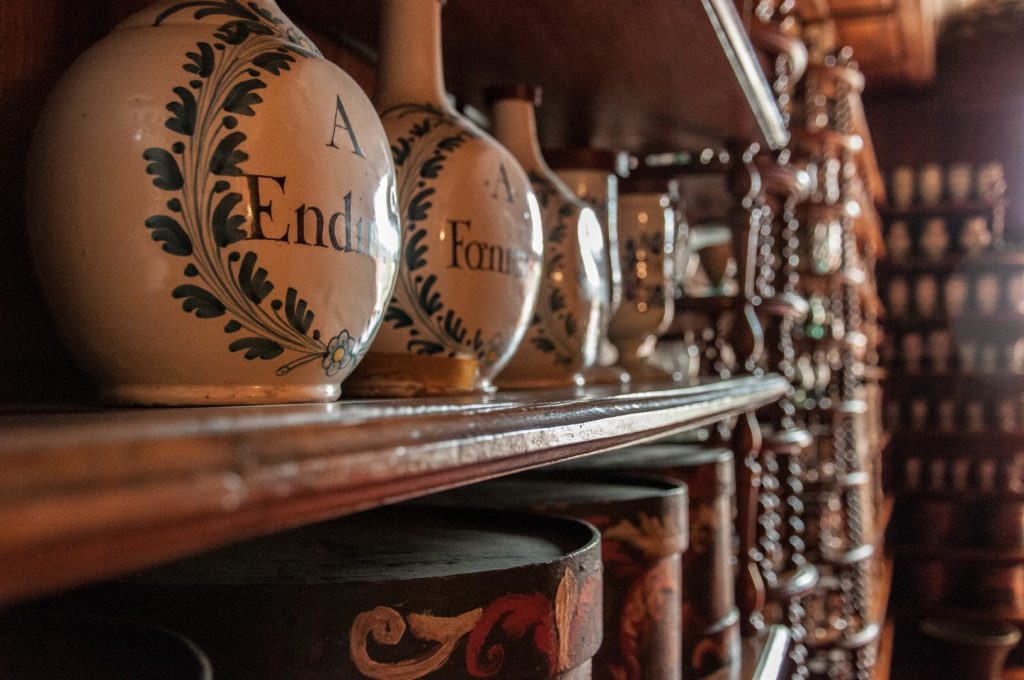 With its woodwork, starry vault and inlaid floor, classified as a Historic Monument, this 17th century apothecary is considered one of the most beautiful in France. On the shelves are 650 pots, pillboxes and boxes made of wood, earthen ware, glass or tin, most of whichstill contain products from another era including one for treatment of patients with “goat’s blood”, pill box powder, crayfish eyes and mummified human fingers.

Château du Lude: the most northerly château of the Loire, in the Loir (without e) Valley 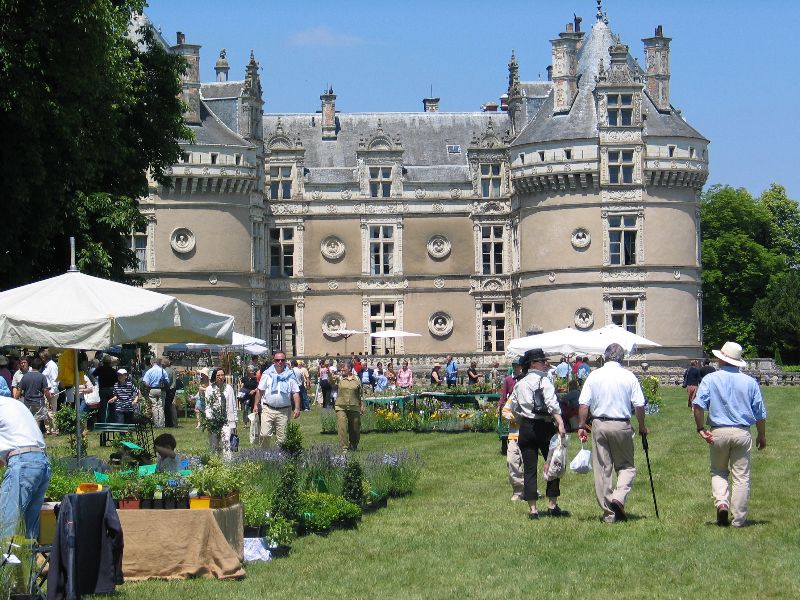 After many years of renovation, owners of the Château du Lude, the Count and Countess de Nicolaÿ will reveal the secrets of two new rooms open to the general public this year – the “hunting room” and the “guest room”! The Jules Verne themed Escape Game will give some extra thrills to those who venture into the public rooms .. it’s a great new way of learning about the building and its history.

The Loir Valley: Land of Mills

The Loir Valley is also known for its large number of mills – all along the river. Today, renovated as guesthouses, art centres or museums, they are of interest to the public – especially these three gems

The Moulin de Rotrou is an old flour mill that is still in working order. The owner is assisted by a group of enthusiasts who want to keep the wheel still turning. The mill offers many activities during summer, based around the cereal garden. There is also a “from cereal to bread” museum open to visitors.

Le Moulin de la Bruère is a water mill where you can see the imposing looking wheel which drives the mechanism to produce flour, electricity and …ice cubes!

Les Moulins de Paillard is a paper mill that has been turned into an interdisciplinary art centre. This is a place of residence for artists and a window for art, dance and contemporary music.

Carnuta: The Centre for Man and the Forest, in the heart of the exceptional Bercé Forest 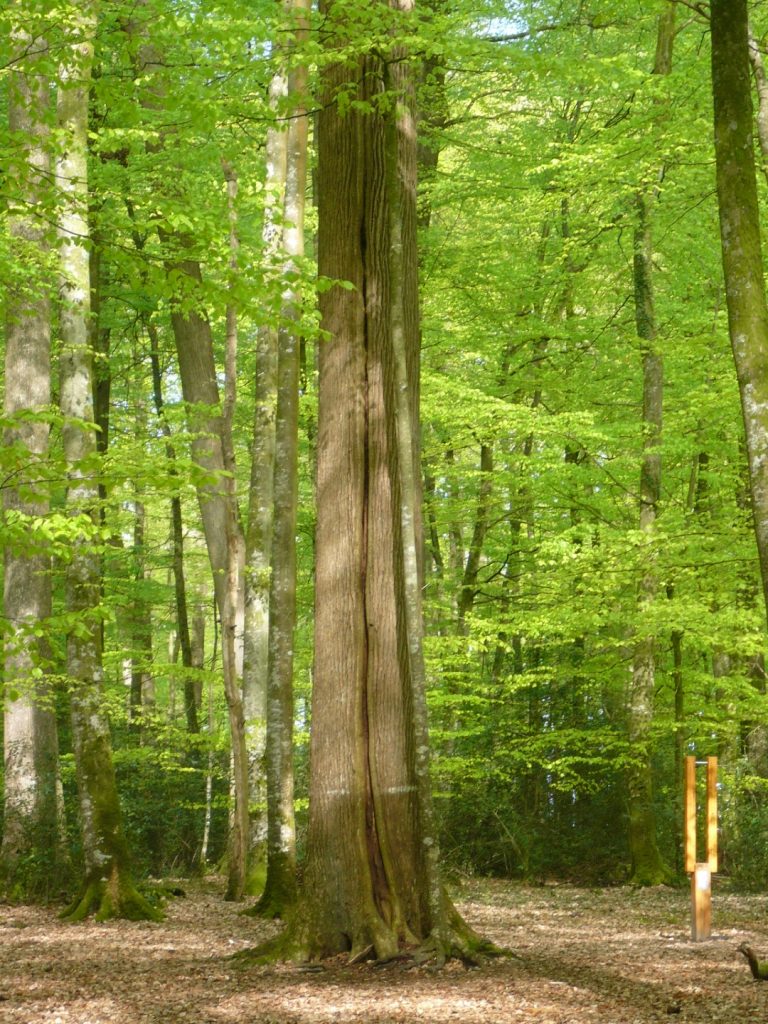 Certified as a Forêt d’Exception ©, this prestigious state-owned forest, once a royal domain, has oaks and conifers stretching for more than 5,400 hectares. With its unusual architecture, it is impossible to miss the Carnuta in the centre of the village of Jupilles. Young and old alike will be fascinated by this interactive space. Visitors may also join guided tours lead by a National Forestry Commissioner. The centre is open from the end of June until September. A brand-new map of the area will be available this summer.

A Jewel of the railway industry – The Rotonde Rail Warehouse 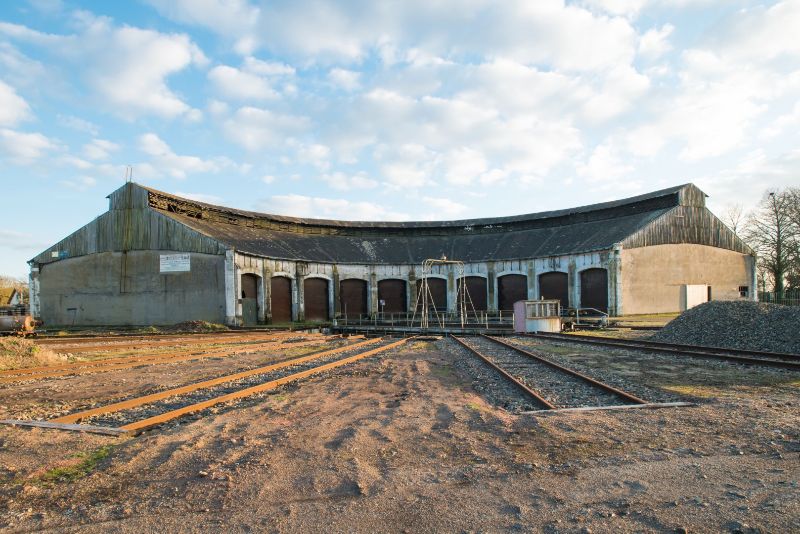 Montabon’s Warehouse was opened in 1890 – one of a series of depots that served the Paris- Bordeaux railway from 1886 – the locomotives that required water and coal. The depot employed 500 people day and night.

There is a quarter-circular building with bay windows and a swing bridge that once served ten tracks. 85 locomotives could be held on site at any one point. The Rotunda closed in 1954 after the Second World Warbombings .Enthusiasts bought the building in 2009 before it was destroyed and begun restoring it. It was given Historic Monument status in 2010. A luxury sleeper car from the Orient Express, the last Baguley handcar and new for this year: a steam locomotive dating from 1948, Leonie, will be on display.

Unique in Europe – the Cafetières and Cie Museum 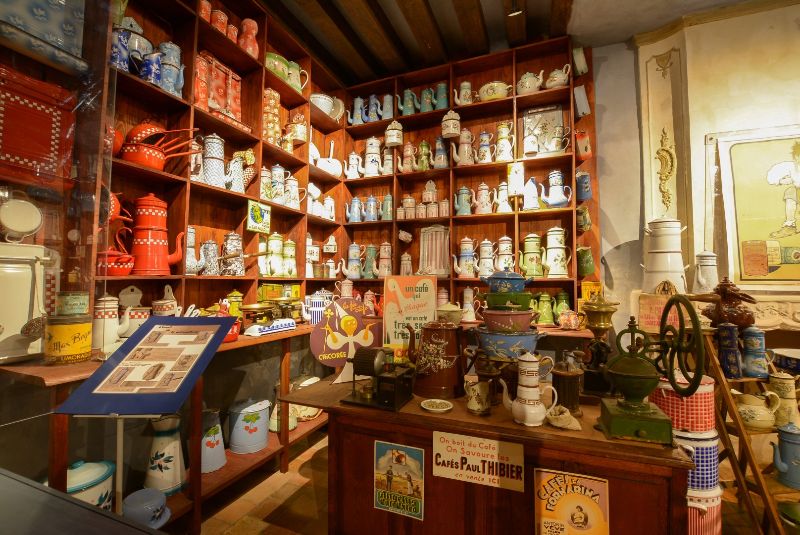 Created by a couple of passionate collectors, the Museum is dedicated to enamel as used in the home. Enamel for household use was popular in all homes from the end of the 19th century until the 1940’s. In this pretty museum, housed in a large building dating from about 1625, visitors can find all the old kitchen and toilet utensils : coffee makers, spice jars, salt boxes or matchboxes, hand basins, jugs – all beautifully presented.

La Chartre-sur-le-Loir: a haven for antique and art lovers 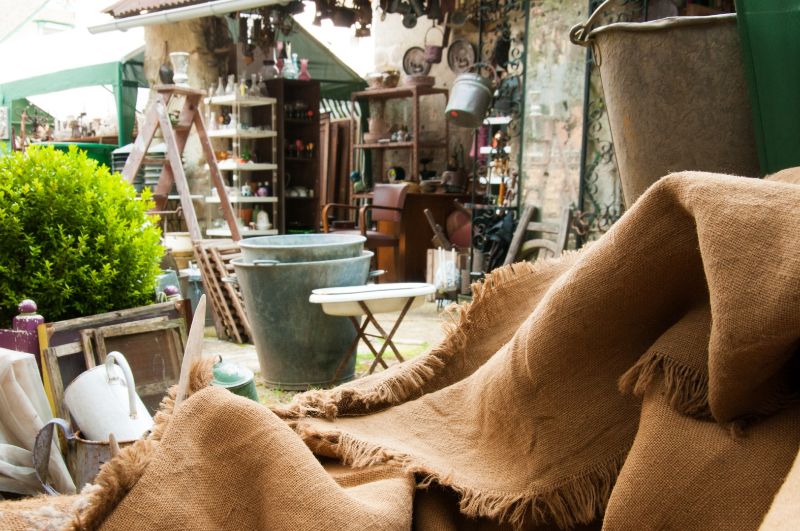 La Chartre-sur-le-Loir is known as the home of second-hand dealers and antique shops – a real treasure trove with everything from art to vintage goods sold in a dozen or so great addresses. From nineteenth century teaspoons to a 70’s armchair, lamps, paintings and ceramics, travel through France, and travel back in time. Weekends are the best time to visit but otherwise many shops make private appointments. 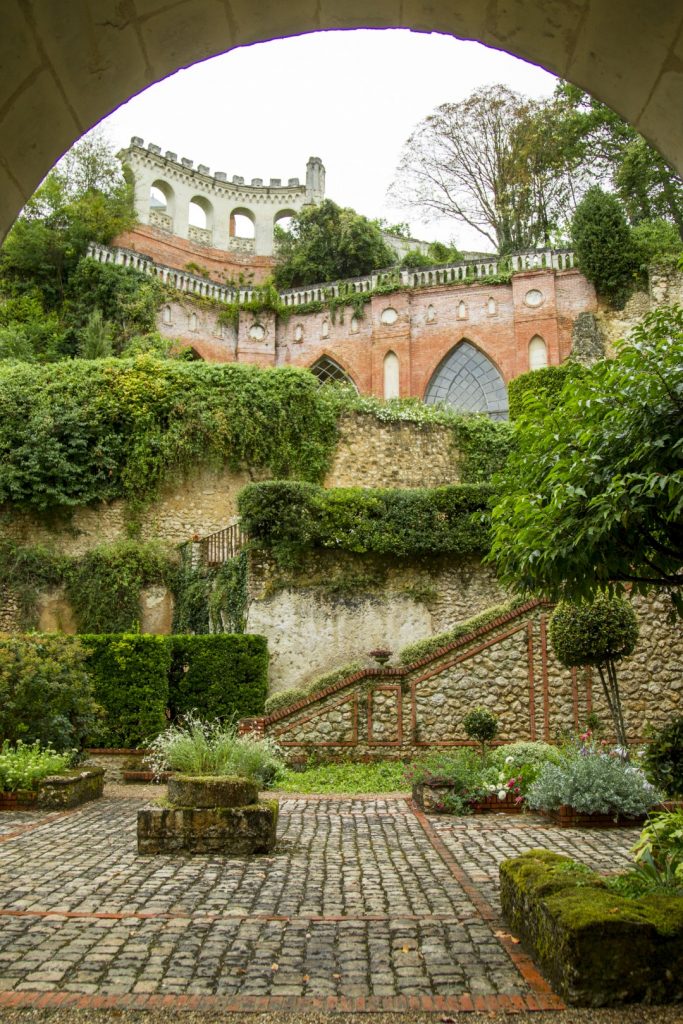 Built in a Renaissance style, this château has similarities with Azay-le-Rideau as it was built using tufa stone. Its central staircase has a remarkable ceiling with carved panels: stylised foliage, mythological scenes, coats of arms and the salamander of François I. A dovecote, outbuildings built in the 18th century and gardens embellish the estate and there’s is a hornbeam maze with a plane tree planted at its centre. The château organises contemporary art exhibitions from May to September.

Travelling to the Vallée du Loir: Take the Eurostar or fly to Paris and travel from Paris Montparnasse Train Station via TGV Atlantique direct to Le Mans (55 minutes) – gateway to The Loir.

Notes for editors: The Loir Valley is situated between Le Mans, Tours, Laval and Angers.  The little Loir, a cousin of the larger Loire, into which the river flows, means ‘dormouse’. This conjures a very apt description of the area – sleepy, rolling French countryside, with charming villages and enchanting towns that seem to belong to a past era when life was less busy and complicated.

The Loir has throughout history been lauded for its gentle style of living. The river was always the lifeline bringing building materials to construct some of the luxuriant châteaux such as Château du Lude, grand enough to rival those of the Loire further south. There are some gorgeous gardens otherwise explore nature where outdoor activities abound.

This is the most northerly outpost of Loire AOC wines which can be enjoyed in the restaurants scattered throughout the region such as Le Moulin de Quatre Saisons in La Flèche.